By Joanne December 12, 2012
After having made quite a few möbius cowls recently (see this post). I've been doing a bit of research into the background of möbius strips and the different ways of making a möbius shape in knitting. 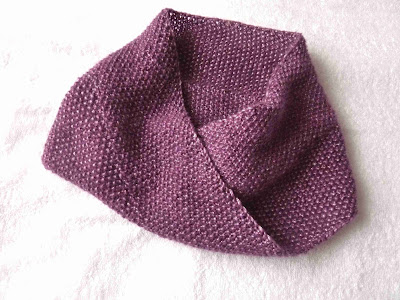 
"/'mə:bɪəs/ ► noun a surface with one continuous side formed by joining the ends of a rectangle after twisting one end through 180° ORIGIN early 20th cent.: named after August F. Möbius (1790-1868), German Mathematician

Though it was independently discovered by Johann Benedict Listing at the same time.

One of the main practical uses for a möbius strip is for drive belts; but I think that the best use is in knitting (though perhaps I'm a bit biased).

There seems to be two main categories for making a möbius; flat and circular.

The first option is for the cast on edge to be the long horizontal, the piece is worked flat and then twisted and sewn along the vertical edge. This would create an obvious seam in the work.

The second option is when the cast on edge is the shorter vertical edge, again worked flat, then twisted and then the cast on / bind off edge is sewn together. This is very similar to the first option and again this would create a seam.

The third option is to provisionally cast on along the short vertical edge and then it is grafted together at the end. 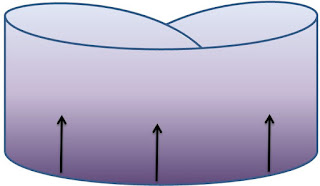 This option is to cast on with circular needles and then make one twist in before joining in the round. So the bottom edge will be the cast on and the top will be the bind off.

The next three options all involve what I consider a little bit of magic. They are started at the middle of the strip and then the piece is worked on circular needles around the entire edge of the work. Therefore, all the outside edges will be the bind off edge.

The first one involves a regular cast on, such as a knitted or long tail cast on. Using the same circular needles that the stitches were cast on, the same number of stitches are picked up from the cast on edge.

The second and third options are relatively similar. They both require a provisional cast on. Cat Bordhi's Moebius Cast On is made using the needle tip and the cable of the same needle and the other is the Alternating Cast-On for Moebius from June Hemmons Hiatt’s “The Principles of Knitting”, which uses two circular needles of the same size.

I'll leave you with a joke from "The Big Bang Theory". Why did the chicken cross the möbius strip? To get to the same side.

Popular posts from this blog

Photo Tutorial: How to Back a Knitted Blanket

By Joanne April 05, 2014
Recently, I was asked to help out with a project. This wonderful blanket (designed by Debbie Abrahams from her book, Blanket and Throws to Knit) was knitted by Ann. I was asked to piece it together and back it. The finished blanket is being used to raise money for When you Wish Upon a Star. The yarn was donated by A Good Yarn and the fabric and cotton by L & C Fabrics.
I thought I’d show you how I went about backing the blanket, I went about it as I would a quilt. Though, I decided tying would be the best way of layering it together, as traditional quilting would be difficult on a knitted fabric.
1. Block the blanket. I pinned it out and spritzed it. Normally, I would wet block, but I was concerned that the red may bleed and it would take some time to dry too.
2. My blanket was too large for a standard width so I pieced the backing. The backing should be a few inches larger than the knitted blanket. Place it right side down on the floor.

By Joanne July 22, 2014
Everyone has their go-to or workhorse cast-on. More often than not it can be a Knitted cast-on or a Long-Tailed cast-on; or perhaps the Cable cast-on. The one I tend to use is the Twisted German cast-on, also known as Old Norwegian cast-on. For speed I’m going to call it – TGCO.
The reasons I prefer this one are – I find it to be the quickest one to do (look at the video at the bottom to see how fast)It has a good balance between being a stretchy cast-on, as well as, springing back into place. I find the knitted cast-ons tend to be too tight for most situations.It creates a strong stable stitch that is easy to knit into on that first row. Some cast-ons can be very tricky or time-consuming on that first row. It is also a fantastic cast-on for top down socks – as it is so stretchy. Last year, I made a cast-on flow chart for the blog, which can be useful in determining what type of cast on to use.

I prefer to learn from a photo tutorial but for those of you who prefer a video, there’s a…
3 comments
Read more

By Joanne March 07, 2012
I love the African Flower motif and suddenly just had the desire to make a bag for my knitting. Took a bit of playing around to figure out how to make the shape I wanted. I wanted a bucket shaped bag. I ended up breaking the shapes down - I made a tube from the hexagons and then a circle for the base. I used half hexagons to give the tube a straight edge. I used Littleberry’s half hexagon pattern - though I restarted the yarn on the right hand side every round.
I used the magic circle technique for the centres and crocheted over the ends of the yarn and connected the hexagons as I went. I managed to find some fabric in my stash that matched the colours of the cotton and used this for the lining. I made twisted cord from the cotton for the drawstring.
There was a bit of yarn leftover so I made a little drawstring pouch for my stitch markers.

Bag Construction
Make a tube with the hexagons, eight across and 4 high. Make 8 half hexagons for the top and bottoms to make the edge straight. I found…
8 comments
Read more